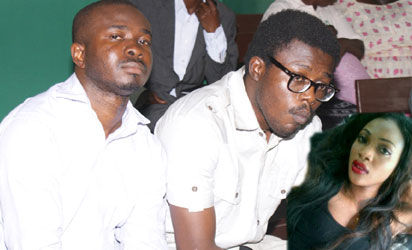 Ahead
of the formal arraignment of the suspects in the murder of Cynthia Osokogu
Udoka before the state High Court, two pharmacists, Orji Osita and Maduakor
Chukwunonso charged alongside the accused have been set free by the court.
Justice
Adeniyi Onigbanjo ordered their release from detention while giving his ruling
in  a motion filed by the two accused persons.

The
Director of Public Prosecution, had in his advice dated Nov 1, 2012 declared
that the two pharmacists were not culpable of the charge of murder and other
charges.

However,
the other accused, Okwumo Echezona Nwabufo and Ezike Ikechukwu Olisaeloka were
found culpable.
Granting
the pharmacists’ release, Justice Onigbanjo held: “Having carefully considered
the process filed in support of this application and the contents of the
Director of Public Prosecution’s advice dated Nov. 1, 2012. attached as exhibit
OEI to the 2nd respondent’s affidavit of response to this application to the
effect that the applicants (the pharmacists) be released unconditionally since
they have no case to answer.

Nigeria Among 12 Most Dangerous Nations For Children To Live — Report

This site uses Akismet to reduce spam. Learn how your comment data is processed.

Latest News The Recorder Online News - November 27, 2020
0
The Federal Government on Thursday gave a damning revelation that 66 per cent of Nigerian children in rural areas can neither read nor write.   The...

Latest News The Recorder Online News - November 27, 2020
0
Gunmen have assassinated the Olufon of Ifon, Oba Isreal Adeusi, in the Ose Local Government Area of Ondo State. A relative of the monarch confirmed...

Latest News The Recorder Online News - November 27, 2020
0
The Inspector-General of Police, Mr Mohammed Adamu, on Thursday, visited the Oyo State Police Command, Ibadan to encourage his men to go back to...

The Recorder is operated by backtoback communications Network Ltd. Our mission is to be the essential online news medium in Nigeria and globally. Our aim is to professionally provide our readers with sizzling information accurately, objectively and timely.
Contact us: [email protected]
© © The Recorder Online News Powered By Back2Back Communications Ltd. 2017
MORE STORIES